The Emoji Company: “Yes, we are looking at making a move on the toy category”

The globally renowned and literally iconic Emoji brand is formulating a move into the children’s sector through toys and a variety of animated content concepts that are still in discussion.

Until now, Emoji has carved out a hugely successful licensing portfolio across the teenage and young adult market through lifestyle licensing partnerships that span the globe, and last year, took home a Licensing Award in the Best Teen or Adult Licensed Property category.

The win seemed to top off a year that The Emoji Company founder, Marco Huesges, marks as “another great success story for the Emoji brand,” throughout what was considered by many as a ‘Disney year.’

And as that success story goes, Emoji is now looking at a new chapter for its licensing efforts, laying out its plans to move in on the children’s market over the coming months, be that through toys, publishing, animated content, or – in fact – a culmination of all three.

“The answer here is yes. While Emoji is established globally and targets primarily teenagers and young adults, we believe that there is an angle to address the kids’ market which is mostly connected to the toy space, in particular to collectable toys and plush,” Huesges told ToyNews.

“We are carefully analysing this market to ensure we make the right move, we are discussing several animation concepts with development studios and potential partners from the toy and the publishing space. It is a time-consuming process but we hope to have clarity within the next eight to 12 months on which direction to go.”

For Huesges, diversifying the portfolio in such a way is nothing out of the ordinary. It’s fair to say that the CEO has successfully managed to juggle, and maintain prominence within, an ever-widening number of categories for the Emoji brand, and interestingly, it is through the company’s burgeoning loyalty programme category that much of its success has been born.

It kicked off with Burger King when the company ran a global programme that offered 30 different Emoji brand plush collectables. This, in turn, led to multiple discussions with other potential partners in the space, all of which proved “to be successful above the average.”

Not only this, but it was a planned move into the Chinese market that cemented the success of the brand over the course of 2019, when Emoji managed to open three Emoji branded stores across its mainland.

Huesges is now thrashing out plans to open another ten over the course of this year, and only recently successfully launched the official Emoji brand store on TMall.

“This development in China is a great way to demonstrate the variety and the depth of our brand and how to bring new designs and messages to life,” said Huesges. “We want the consumer to permanently engage with our brand and we will launch a variety of new projects such as Emoji tea shops to offer exactly that possibility to the customer.”

The potential for the Emoji brand in the collectables space can’t be denied. A category that wholly depends on the introduction of new characters or themes within each wave of launches, Emoji is pretty much tailor made for the market. Emoji is after all a compendium of thousands of character icons, that are not only recognised globally, but used by millions each day.

That said, simply because the brand enjoys a universality in its translation, doesn’t mean Emoji will be in the habit of using a broad brush approach for all of its territories.

“We know that markets have different demands and tastes,” said Huesges. “China for example is a very specific market, but one of our key territories. We analyse what is needed and give the brand a local look and feel, making it adaptable and suitable for the Chinese market.

“In fact, the demand for customisation of the Emoji brand is constantly growing and gives partnerships a personal taste. In a fast-moving consumer goods market you cannot stand still and need to permanently reinvent yourself and invest. We take this approach with all of our key markets across Europe, the US, China, Brazil, and Mexico.”

For Emoji, 2020 will start with some big noise and some ‘highly recognisable partnerships’ across Europe including a large scale direct to retail programme, multiple loyalty programmes, and some high level brand collaborations in the fashion space.

“In the US, we have built an incredible licensee roster and look forward to launching great programmes at retail. We have successfully added lots of different new categories, from shaped vitamins, entertainment services to exciting new food and beverage deals,” said Huesges.

“We have already had some great results and are perfectly prepared for the year ahead to come. We do expect another great year ahead of us, and have already secured noteworthy partnerships all around the globe, which will be launched in 2020,” he concluded.

The emoji company has developed and owns the world’s largest library of official emoji® brand icons with registered emoji® trademark in more than 100 jurisdictions globally and licensed products in 130 countries while constantly expanding into new territories and product categories.  S ource Read more

The emoji company has developed and owns the world’s largest library of official emoji® brand icons with registered emoji® trademark in more than 100 jurisdictions globally and licensed products in 130 countries while constantly expanding into new territories and product categories.  S ource Read more

WildBrain CPLG, one of the world’s leading entertainment, sport and brand licensing agencies, has scored a new wave of deals in EMEA for emoji® – The Iconic Brand, across the fashion, accessories and back-to-school categories.  WildBrain CPLG’s Middle East and North Africa (MENA) team has inked a deal with Yellow Flower (Premium Brands) for an [...] Read more 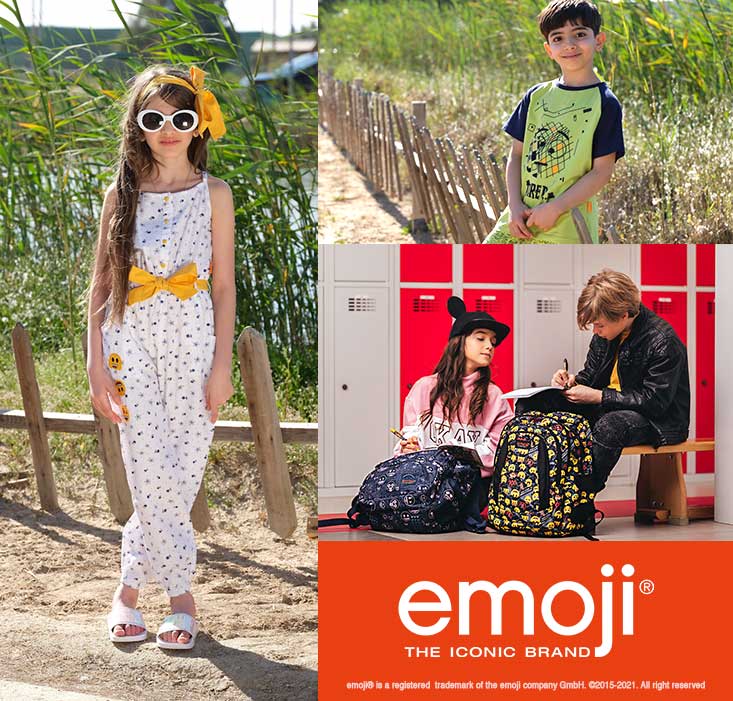 WildBrain CPLG, one of the world’s leading entertainment, sport and brand licensing agencies, has scored a new wave of deals in EMEA for emoji® – The Iconic Brand, across the fashion, accessories and back-to-school categories.  WildBrain CPLG’s Middle East and North Africa (MENA) team has inked a deal with Yellow Flower (Premium Brands) for an [...] Read more